Featured Blog: Conversations from the Classroom: English Learners Speak the Language of Theatre 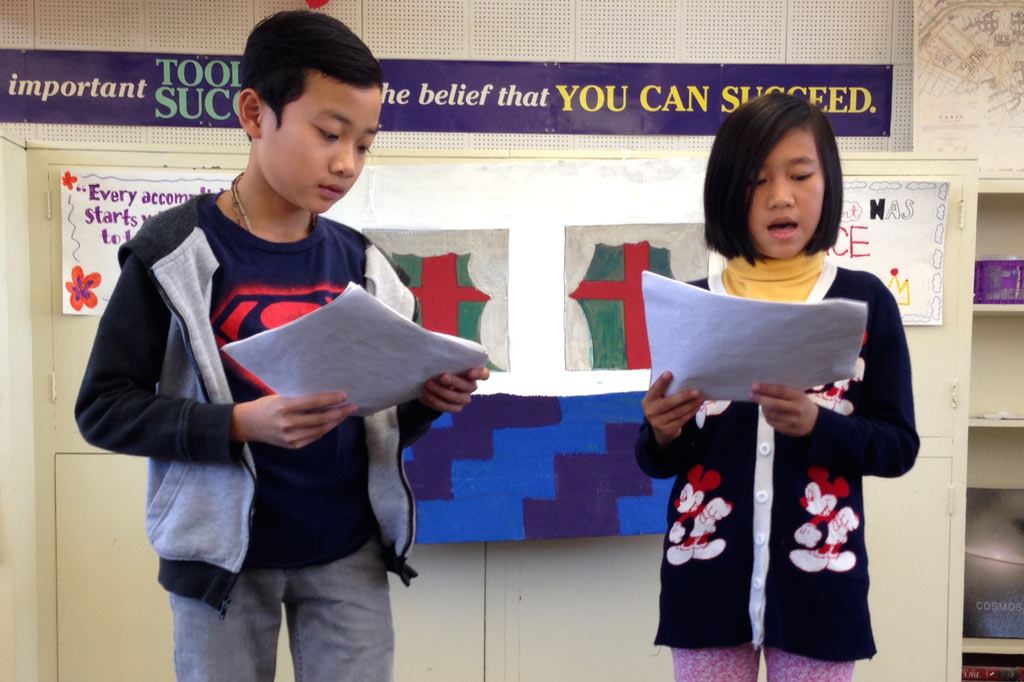 Over 50 percent of Los Angeles County citizens live in a home where a language other than English is spoken. I teach theatre at Jefferson Middle School in San Gabriel, about 10 miles east of Downtown L.A.; approximately a quarter of our students are English learners, and they speak 25 different languages. In previous years, I have taught language learners with some degree of English proficiency, but this year I have students who do not speak English at all, or who are just beginning to speak the language.

Three months into the school year, I’m amazed by what they’ve accomplished. Just last week, Khin, a seventh grader from Burma who started the year not speaking any English, got up on stage and read a script with another student—in English! But I also wanted to know what else I could be doing to support Khin and my other English learners. (Khin is not her real name, nor are my other students mentioned by their real names.)

So I sat down to talk with two of my colleagues, David Johnson and Linh Phuong, who are both full-time English Language Development (ELD) educators with a combined 44(!) years of classroom experience. They offer instruction in core academic curriculum to the same group of students for much of the school day while simultaneously cultivating their students’ English language skills.

My first question: What do you think would be effective strategies to assist English learners in theatre class?

David: Provide them with things in advance so that they can translate. Not just scripts but also simple classroom directions, like “Turn to page 65.” You guess what you think you are going to need them to know, and you create a translation sheet for them.

David: Role play could be really short, situational dialogues, like ‘Who’s in your family? For students just beginning to learn English, you provide a template: ‘Here’s your conversation. You’re just going to substitute brother for sister.

But it’s not just about what I can do for these students as a teacher, I’ve discovered; it’s also about what they can do for one another.

“Do you have the English learners sit together all the time?” David asked me.

“I have them sitting in different places,” I explained. “I didn’t want five or six students in a corner and then have the other 30 students doing something else. I was trying to normalize the social situation for them.”

“If you can make them part of the class, then you’re doing a positive thing for those kids, and it’s good for everybody else, too,” he said.

I think that’s one reason why Khin, my Burmese student, performed on stage recently. The students in my class who already speak English, or the students who are still learning but are more confident, have started coaching the English learners.

I told David and Linh about Sam, who is from China and is just beginning to speak English, but already “has been on stage and improvised and spoken a few words. The students in his small group gave him a role, or some action to perform, and he did it.” I also told them about Hui, who speaks Cantonese and Mandarin, and Carey, who speaks only Mandarin. “Hui, who is more English-proficient, explains things to Carey,” I said. “I’ve been finding it offers meaning to the student mentors. It makes them happy to help someone else.”

And as David and Linh know, it’s not just about teaching students a new language but also embracing their first language and culture. “I was speaking with Tony”—a counselor at Jefferson and Linh’s husband—“and he suggested having kids in drama write stories about their own culture,” I said. “Then I thought, why not have them write plays in their own languages and have them translated? When they perform them, either they would speak in their own language, or have dual scenes going on, with one in English and one in their language—”

“Or maybe have an interpreter on the side?” suggested Linh.

“This is something that gets talked about,” added David. “Teachers say, ‘Well, how much are you going to allow them to speak their own language?’ and I’ve heard people say, ‘You have to insist, right from the start, English-only.’ And I’ve never done that. I don’t think that’s the way to go.”

Tyrone Howard, an education professor at UCLA who spoke recently at a conference I attended for teachers of English learners, agreed. “He emphasized honoring and embracing your students’ languages, whether they use slang or a completely different language, because it’s an essential part of who they are, and, therefore, it’s a part of how they learn,” I told David and Linh. “To have your students completely compartmentalize language that is not academic English, and to not have them engage it, can hamper their learning process.”

David and Linh agreed that moving beyond academia and talking or reading about pop culture—whether it’s celebrities or video games—can be a useful way to engage the kids.

“You might talk about TV shows or movies,” said David. “Encouraging them to watch TV is not necessarily a bad thing.”

Said Linh, “The parents are always kind of surprised: ‘You want them to watch TV!’ Yes, watch the news or a wholesome TV show. Watch with them.”

I asked if subtitles were helpful, and Linh and David said that just listening is better.

“Sometimes, for all kids, it’s good to watch a scene with no sound,” added David. “They make up their own story, or they’re just talking about what they see.”

That gave me an idea: “I could have people act out scenes without any dialogue,” I said.

“Then they write their own dialogue,” said Linh, “even in their own language.”

“Another thing I do with English learners is give them a script with missing words,” said David. “They’re not listening for the whole thing, but they are listening for a specific thing.”

Before wrapping up, I asked David and Linh, “If you could only give one piece of advice to someone teaching English learners, what would it be?”

“Talk to other teachers who have experience with them,” said Linh. “David and I are always asking, ‘What are you doing? How are you doing it?’ Even though we teach different levels [of English language learners], some of his ideas I can alter a little bit to fit my kids.” Linh summed it up as, “Having a department meeting, collaboration, talking.”

David’s advice is to be “aware of how much time it’s going to take them to learn things, no matter how well they’re doing. Try to come up with tasks they can have success with, whether it’s a sentence or a word here and there.”

Linh was inspired to echo motivation David had offered when she was feeling down about something. “He was telling me, ‘Just think of it this way: think about the number of kids who have come back speaking English. That’s what we really want.’” She added, “Like David said, it takes time. You might not see it this year.”

The development that happens from one year to the next can surprise you, said David and Linh. “Kids leave my room not speaking, and they come back speaking English,” said David.

PrevPreviousFeatured Blog Want Better Gigs? It’s Not About You
NextMore Than a Number: The Role of the Arts in Youth Development ProgramsNext